The making of the modern world from 1750 to 1918. It was a period of industrialisation and rapid change in the ways people lived, worked and thought. It was an era of nationalism and imperialism, and the colonisation of Australia was part of the expansion of European power. The period culminated in World War I (1914 - 1918) and World War II (1939 - 1945).
Key inquiry question #1:
What is the significance of World War I? 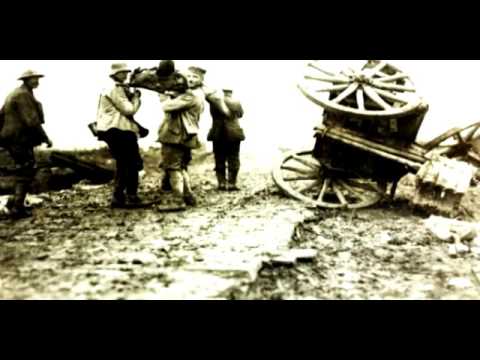 An overview of the causes of the war, why men enlisted and where Australians fought (ACDSEH021, ACDSEH095, ACDSEH024)

Share the following background information with students prior to completing learning activity:

Advances in military technology before World War I meant that all the advantages were with a defensive force. If you dug in you could mow down any attackers with machine guns and high explosives, though this was not fully understood at the time.

The technology of flight was still in its infancy so though still dangerous, unlike in World War II, the power of aerial attack was not devastating to a static defensive line. Armour also could not be used to smash such a line until later in the war. Tanks were not invented until 1916 and even then they were unreliable and subject to breakdown.

This changing balance meant that, in places where an army could not go around entrenched enemy soldiers, they had to dig in opposite them and then try surging attacks to break the position.

When the German advance on Paris was halted early in World War I the Germans simply established trench lines on occupied Belgian and French soil. These lines would eventually stretch from the English Channel to the border of neutral Switzerland. The area became known as the Western Front because it was Germany’s western front line in the war. The Allies could not go around this line so they had to go through it in order to liberate neutral Belgium which was already occupied by Germany.

Battles developed which resulted in hundreds of thousands of casualties on both sides but with little territorial gain; the Germans were largely able to maintain the position of these lines until 1918. Over 290 000 Australians fought on this front and over 45 000 were killed or died of their wounds on the Western Front during the war.

A soldier of the Western Front became familiar with the dangers of being shot by machine gun or sniper or of being shelled both by high explosives and poisonous gas. A new medical condition surfaced which became known as ‘shell shock’, where soldiers suffered severe psychological trauma that manifested itself in physical symptoms. The soldiers fought like this for over four years, alternately living in trenches and behind the lines in billets, facing death, through the mud, snow and heat of the changing seasons.

A rich collection of diaries, letters, maps, photographs, artworks, posters and newspapers on the Great War are available for further research

Students can locate and sequence the places where Australia fought, describe the nature of warfare during the Gallipoli campaign and outline the Australian governments' control on the home.

Analysis and use of sources

Learning across the curriculum

First hand accounts of the ANZAC landing at Gallipoli on 25 April 1915.